By Pastor Jody Bowser, published in the December issue of The Messenger newsletter.

I’ve been to two funerals in the past three days. How’s that for an uplifting first sentence!

Both were men in their seventies. Both genuinely loved Jesus and lived for Him. Both served faithfully in various ministries here at King Street. Yes, there were tears shed. There’s no easy way around death. But both services were marked with a definite sense of hope and joy. These two men are better today than they’ve ever been before.

I was at a funeral a number of years ago and one of the men who stood up to share made a very interesting point. He talked about trees. He pointed out that when we look at a large, full-grown, mature tree, we don’t really give much thought to how big or tall it is. We simply appreciate the shade it provides … or its beauty. We enjoy how green it is in the summer and how its leaves turn a beautiful red or orange in the fall. It’s only when the tree is down, though, that we get a true measure of how big the tree really was. We can count the rings in the trunk and appreciate its age. We can get out a tape measure and actually measure its height. We see how tall it truly was.

That’s precisely what happened at the two funerals I attended. We appreciated and honored the measure of these two men. We talked about the way these men lived their lives—and the things they did that left a legacy. We saw how tall they truly were.

Which brings me to the title of this article: “Just Showin’ Up.”

Can you guess what was shared at both funerals by people who loved them? When all was said and done, the thing that mattered most was simply their presence. Grown kids talked about how years ago, their dad was there at their baseball games or choir concerts. A son told a very touching story of being in high school and getting a flat tire by recklessly banging into the curb when parking the car that morning. He dreaded having to call his dad and own up to what he had done. But instead of being angry, his dad used his day off to come to the school, take the tire to the shop and have it fixed by the time he walked back to his car after school. This wasn’t just a “nice little story” about his dad. This episode—and many many others like it—gave the true measure of the man. He showed up. He cared.

Which is a great thought as we head into Advent this year.

Advent is ALL ABOUT the fact that God showed up. It’s one thing to say you care. It’s another thing to actually show that you care by being present. That’s the heart and soul of Christmas.

I hope you give this some real thought during Advent season. Get beyond the decorations, presents and the various extracurricular things that come with Christmas. You might also need to move beyond some of the pain and grief that can also get triggered every Christmas season. Focus your mind and heart on the fact that God didn’t just SAY that He loved us—He showed us! He didn’t just tell us to fix our own flat tire (and scold us for driving recklessly)—He came and fixed it for us. He sacrificed. He gave. He showed up.

And while you’re at it, take to heart what I heard at these two funerals. Realize that when it’s all said and done, it’s the time you give to your loved ones that really matters. When the day comes for your funeral (unless Jesus comes back first—which He very well might!), they’re not going to be talking about how many hours you worked or how much money you made. They’re going to be talking about the simple ways you demonstrated your care: The baseball games you attended, the concerts you endured (I mean enjoyed), the times you went out of your way to fix the tire instead of criticizing the poor decisions, those few minutes you took to teach your grandchild how to hold a hammer or sew a hem.

The way you just showed up. Just like Jesus did. 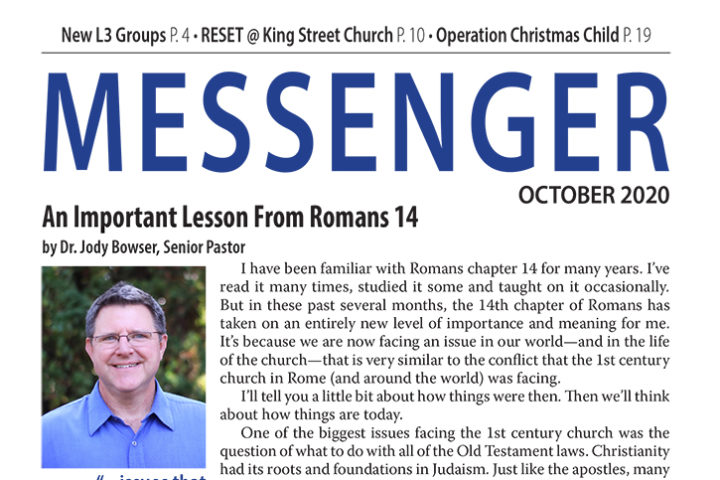 An Important Lesson From Romans 14

An Important Lesson From Romans 14